A Bridge to Prosperity

By Mary Kate Hailer, Joseph Kauffman & Kim Rice
As time marches forward, people like to look back and bring things once left behind with them into the future.

What’s old is new again. And sometimes that rebirth can touch down with a significant economic boom.

If the hope was that the bridge would open up the floodgates and welcome in a wave of on foot pedestrians to Jeffersonville’ s downtown businesses, the bridge has delivered. In a News and Tribune article from last year, the Waterfront Development Corp., the company that maintains the bridge, estimated that over 1.2 million people crossed the bridge into Jeffersonville in 2014.
Video by Alphonzo Bridgeman, Kristin Kennedy, Zak Kerr & Coby McKinley
On a sunny, seventy degree April day, Matthew Richmer and Samantha McCoy added their names to the list of those who’ve crossed the bridge this year.

“It’s just a nice area,” said Richmer. “They’ve really kind of outdone themselves with everything they’ve done out here.”

The two said they came across the bridge that day to walk the downtown and enjoy the weather.

“Lots and lots of people walk the bridge,” said Warren Schimpff, owner of Schimpff’s Confectionary. “Families get out. They have fun. They wander the streets of Jeffersonville and some wander in here.”

The increased foot traffic comes at a time of change for Schimpff’s, which is expanding for the first time since 2000. The Schimpff’s have acquired the building next door to theirs and will be converting it into a room where larger quantities of candy can be made. A display window will allow customers to see the process, not totally dissimilar to the way the 2000 expansion opened up the opportunity to show off the process of creating red hots.

“The opening of the bridge has brought a tremendous amount of people,” Schimpff said. “It’s really helped the bottom line here and been very good for us economically.”

A deeper look into Schimpff's Confectionary can be found here. 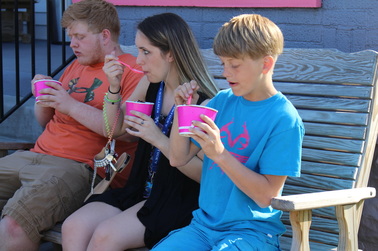 Big Four Burgers + Beer first opened its doors in 2013 and is one of the downtown’s newer additions that the bridge and the additional customers it attracts helped bring to the area. One of the restaurant’s distinguishing features is a multi-floor, outdoor seating area that faces the Indiana banks of the Ohio River.

Reeder said the outdoor area also helps bring the bridge crowd to the restaurant's doors on days where the weather is nice.

“The view attracts a lot of people. People want to be outside. They want to be by the water,” she said. “We get a lot of people who come in off the street to drink a beer, enjoy the view, and, of course, have some nice burgers as well.”

Off the street traffic can translate into big business for restaurants like Big Four Burgers + Beer.

Maddie Garner, manager at Pearl Street Treats, said the bridge has had a major impact on the frozen yogurt shop as well.

"If it's rainy or the type of weather where people don't walk the bridge, there's no customers," said Garner. "If it's sunny and nice out, we have a lot of customers."

Garner said it gets so busy that there are times when the shop has to briefly close for 10-minute periods so the staff can get everything back to a clean and orderly state.

Richmer and McCoy said they had both come across the bridge to Jeffersonville for the walk, the sun, and the view, citing the fact that these activities were free as a reason why. However, Richemer also admitted they would probably grab dinner nearby at some point and this kind of “while I’m here” mindset is one of the driving forces behind the area’s economic growth.

The completion of Big Four Station has opened the bridge and the walkway up to even more of a family vibe and atmosphere.

The beginning (or end if you are coming from the Louisville side) of a bridge walk is now accompanied by a fountain that is lit up at night and a multi-level, cascading waterfall fixture that leads into the fountain. A nearby playground provides an opportunity for great fun for the kids while the also nearby eating area serves as a shady spot for picnickers keen on enjoying the sights and smells of a gorgeous day.

Gary Weaver said he was visiting Big Four Station with his family after crossing over the Big Four Bridge.

“I just wanted to enjoy the park on a nice, beautiful day like this with my family,” said Weaver, who had also spent time in Louisville’s Waterfront Park which the bridge connects Jeffersonville to. “We’re here to have a little picnic and just enjoy the weather.
Sundown thins the crowds but a warm day lingers and there are still plenty of people who are not yet ready to go home.
The Big Four Bridge is lit up. It will stay that way throughout the night and until tomorrow morning when, if the weather’s right, a new batch of visitors, walkers, bikers and customers will flood over and through the doors of businesses like Schimpff’s and Big Four Burgers + Beer.

With them they will bring the attention and dollars fueling the economic boom of Jeffersonville’ s rustic yet newly invigorated downtown.
Powered by