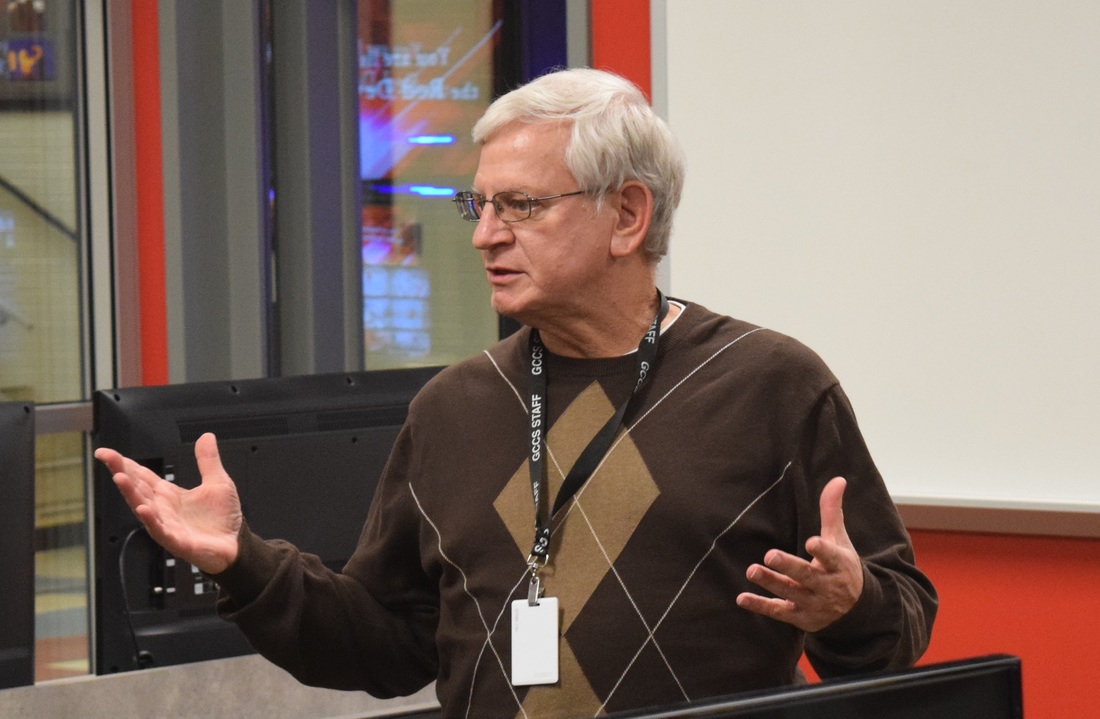 Tim Dench’s job demands that he wears three hats at one time.

The reason is because he is the current station manager of WJHI (, radio/TV instructor at Jeffersonville High school, and overseer of construction of Charlestown and New Washington High School’s Radio TV programs.

Dench, a 42-year-old teaching veteran, was born in Erie, PA, but then moved to Louisville to finish out his childhood.

Dench went to Morehead State University for an undergraduate degree in communications. He later went to The University of Louisville for graduate school.

Radio/TV is important in high schools, according to Dench. He said telecommunications is the “college” name for the process he goes through at Jeffersonville High School.

Dench said that he is used to having the stress of having multiple tasks on his plate at once.

Another hat that he wears is owning his personal video service.

“Dench’s Video Service,” Dench said. “The pitch is ‘Good to 100 feet underwater and three miles in the air; anything in-between, we have done it’.”

He said his business brings real life experiences for his students in class.

One example is the Paul Hornung awards held in Louisville. He said it brought opportunities for students to meet sports legends and get experience behind the camera, along with interviewing guests at the event.

“My business connections give students a chance to succeed,” Dench said.

The Paul Hornung Award is a college football award ceremony created in January, 2010 by the Louisville Sports Commission (LSC).

Dench, at a young age, looked up to sports:

“Every kid I grew up with is either dead or in jail,” Dench said. “Sports saved me.”

When Dench was in the seventh grade, he said he went out for the wrestling team.

“I got kicked off after one day”

The next year he did the same thing as an eighth grader. This time Dench said he lasted six more days.

After his high school sports were over, Dench then came back as the coach of the wrestling team at Waggener High School. He said he had a record of 88-1 in just six years of coaching, setting numerous records for coaching in the state of Kentucky.

Dench believes his teaching was more important than his coaching: “I don’t have a coaching legacy,” He said.

Dench said that his motivation is to be professional, whether it is coaching or broadcasting. Dench stresses to each student about how important being professional is.

Dench contributed a lot to the WJHI’ new learning facility. He said he found the new building and designed the interior of the studio. If something was going on in WJHI program, Dench said he knew about it.

WJHI is home of the first “Glass Skybox.”  Dench said this sets Jeffersonville High School apart from the rest.

Working with WJHI is just one of his many hats. Another hat is creating a curriculum.

“When the day comes to pass the torch, it can be done successfully,” Dench said.

Dench was quick to give praise to the community and faculty of the Greater Clark County School Corporation.

The Greater Clark County School Board came together and created a bond worth $4.5 million. Dench said that the money is spread out evenly between the three high schools that he oversees (Jeffersonville, Charlestown, New Washington) for renovations and equipment.

All three schools got the same equipment, even though New Washington High School only has radio and the other two have both radio rooms and television studio.

The new studio was named in honor of Ted Throckmorton, a Jeffersonville graduate, who was also a sportscaster for 50 plus years. “A very rare man,” Dench said. “Throckmorton was huge supporter of the community. Now a scholarship is being created in his honor.”

Throckmorton loves working, but not as much as Dench does.

“In 42 years of teaching never have I dreaded to come to work; I’m always looking forward to the next day,” Dench said.

“So many good students come through my program,” said Dench.

Although teaching is great, Dench said students learn more life lessons in my class than anything else.

“I hope all my students have professions instead of jobs,” Dench said. “I build relationships with my students that last a lifetime.”

Former student Clay Ables had nothing but nice words about Dench.

“He is a just a rare person,” Ables said. “I couldn’t have imagined when I joined his class in my freshman year of high school that the doors he would help open for me.”

It also seems like Dench’s life lessons to pay off in the end. Ables said that Dench helped him land him the opportunity on The Terry Meiners Show and a position as play-by-play announcer on ESPN 3.

“He gives you the autonomy to be successful,” Ables said.  He’s taught me not just sports broadcasting, but about business and how you treat people. If you asked anyone who is a student or works around him, the one thing we all respect more than anything else is he cares for his students. Dench understands people, that’s why he’s been so successful and will continue to be.”