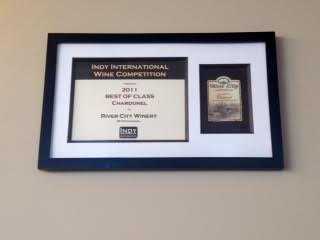 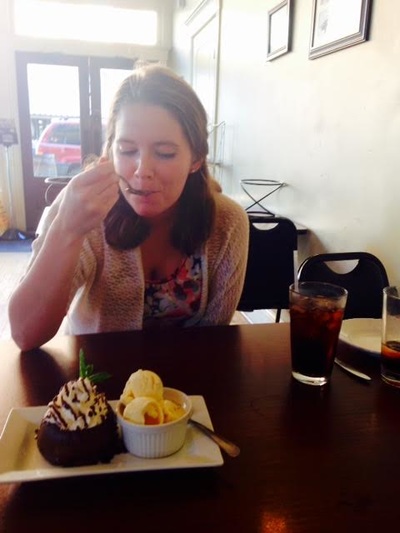 This acronym is displayed on River City Winery's social media page. It perfectly describes the feeling of walking into the New Albany establishment.

The smell of pizza, pasta, and wine awakens your senses, and the fireplace burning softly adds a coziness to the atmosphere. Cushioned chairs surround the fireplace and welcome visitors to have a seat. The bar scene is surrounded with lively people laughing and enjoying their food and wine. While others seem content at booths and tables throughout the restaurant, others gather around the outside eating area.

Tucked away in historic downtown New Albany on 321 Pearl Street, River City Winery is becoming a weekend hotspot for both locals and those across the bridge. The winery is a two-story brick building, built in 1900 and is just a few blocks from the New Albany riverfront.

“It has a nice and cozy atmosphere and the food and wine is amazing. It’s not typical food you can just get anywhere,” Morrow said. She said her favorite dish is the Chicken Cordon Gouda.

River City Winery opened for business downtown New Albany in 2009. Starting with wine and small appetizers like cheese plates, the business has grown immensely in seven years. Now serving lunch, dinner and a variety of desserts, it is open Tuesday through Sunday, 11a.m. until 9 p.m.

The River City Winery bustles with regulars and newcomers alike wanting a taste of all that is offered. The social media page boosts that over 18 thousand have visited the winery. They currently hold over a four and half star rating.

Tasha Boel, Prospect, KY resident, enjoys coming across the river to visit the winery. Boel said she comes for the atmosphere, especially when they have live music.

“It’s a good place to meet girlfriends for wine and pizza,” Boel said.

The winery is owned by Gary Humphrey, who works full time with the New Albany Police Department as Assistant Chief of Detectives.

“River City Winery is best known for their atmosphere. We are much more than just a winery,” Brett Walker, general manager, said.

On Wednesday and Saturday nights they host a live band from 7 p.m. to 10 p.m. and Sunday evenings they offer trivia night from 6 p.m. to 8 p.m.  They provide entertainment as well as delectable food and wine.

Another point of distinction for River City Winery is that all of their wine is house made. The basement below serves as a fermenting area for the wine.

According to Walker, River City gets their grapes from local and regional vineyards.  They mainly grow Chambourcin, Traminette and Vignoles. To date they have won the 2011, 2012, and 2013 Indy International wine competition, as well as an award in 2009 from the Indiana Landmarks Foundation for historic renovation of downtown New Albany.

“When you need to replace a part, or talk to customer service you can’t just go on Amazon. We have to call Italy,” he said.
This past year River City Winery participated in the 502 Foodie Week. Couples who participated enjoyed a three course meal for two.  The cost was about $50 per couple. Along with appetizers and dessert, guests will have a choice between three dinner options, which included specialty pizza, bourbon glazed salmon, or chicken with bourbon blueberry sauce.

“The people is what makes the winery so great,”  Nicholas Laborde, long time server and kitchen employee of River City Winery, said Laborde, He said the staff often hangs out together outside of work. He added that most people venture to the winery for the unique atmosphere.

Food wise Laborde said his personal favorite is the Chicken Cordon Gouda, but the pizza is pretty popular too. He added the best dessert they have is the lava cake with ice cream.

Courtney Nutter, Jeffersonville native, said her family has been coming to River City Winery since they opened in 2009. River City Winery is one of her favorite places. “By far the best place to enjoy a glass of wine and a delicious dinner.” Nutter said. “I really enjoy the atmosphere. It’s a great place to relax and unwind after a work week. I definitely recommend trying this place out –you won’t be disappointed, “she added.

“From their pizza to their crab cakes this place is at the top of my list of restaurants I enjoy,” Nutter said.

Whether it’s a glass of wine to wind down, music to sooth your soul, or pizza to satisfy your appetite River City Winery has something for everyone. The friendly and knowledgeable staff, coupled with the unique location, make this a memorable evening out on the town.