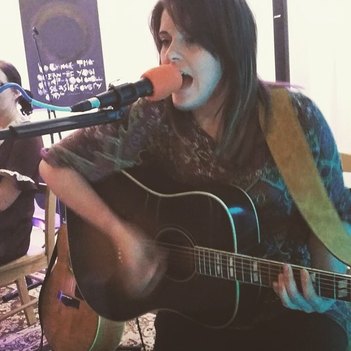 Local musician Kendra Villiger performing as part of Ladies of Louisville Writers Round.
​A lone guitarist sits on the sidewalk, an open guitar case at his or her side sparsely filled with small bills and change.  An acoustic band adds its melodies to the earthy aroma floating through the air of a local coffee shop. They’re seen and definitely heard, but less often are they thought of as the small businesses they are.

Southern Indiana’s music scene is certainly a place for music lovers and hobbyists from both sides of the river to produce and hear the type of tunes and tones that draw them to the medium. However, it is also a collection of professional musicians who double as small businesses selling the art their talent produces to the world.

Kendra Villiger is one of these small businesses.

Villiger plays a genre of music she tentatively describes as “indie rock” consisting of a mash up of funk, blues, garage rock, country and “ballad-y rock.”

“I kind of like to cross genres,” Villiger said. “I don’t like to stay in a box. I’m inspired by so many types of music.”

From beginning with piano lessons to perfecting her guitar skills by playing through the library of Metallica, music has been a long time companion for Villiger on her road through life.

“[Early on] I didn’t read the music off the page. I would just play by ear,” Villiger said. “I still mostly like to memorize things by ear. The shapes of the cords. The muscle memory.”

Villiger started playing guitar around eighth grade and joined a number of cover bands she would play with throughout high school. In 2010, she began writing her own music, a process that eventually became something she “had to do.”

“It became therapeutic,” Villiger said. “If I was freaking out about something I’d have to write or I’d just go nuts.”

Villiger began going to open mics to test the waters of being a solo act. One of the open mics she frequented was held by Wick’s in New Albany.
“After college classes, I’d go to these open mics and just listen to people play. Then I’d get up and play a few cover songs,” Villiger said. “Just being around that and seeing them not be afraid of putting themselves and playing their own songs. That was different for me because I’d been in cover bands for so long.”

Eventually, she was coaxed into playing something original and soon found herself playing venues like Wick’s and Floyd County Brewing Company as a billed solo act. The more Villiger played, the more others asked her play at their own venues. 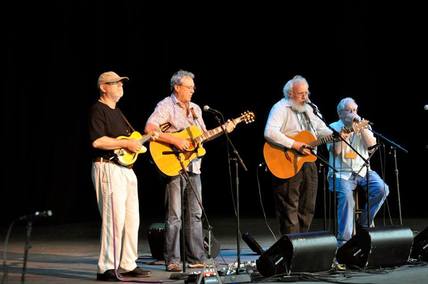 Musicians Dan Boone, Phil Ragland, Marty Rosen and Eddie Hysinger make up the folk band Hound of the Buskervilles.
Marty Rosen, front man of the folk band “Hound of the Baskervilles” and a fellow Kentuckiana musician, spoke to the importance of marketing one’s self or one’s band in these situations.
​
“You have to market yourself or you’re going to have trouble getting yourself to other venues,” Rosen said. “As soon as we get booked at a venue, I’m putting it up on Facebook and sending out an email to the band’s mailing list.”

Rosen said the marketing is as much for the venue as for the band.

“If you do something that draws people in, you’re doing something that’s going to help the venue and get you invited back,“ Rosen said.

Rosen sais he treats his band like a small business and takes this into account when he markets the band and the events they play. This even extends to the more mundane aspects such as taxes.

“It’s absolutely a business. The reason why some people might not immediately see it that way is because it’s not really a business-to-customer type of business,” Rosen said. “You’re talking with, partnering with, and getting paid by the venue owner. Not the customer. So it’s more of a business-to-business type of affair.”

Rosen said thinking about your music from a business perspective is something that separates hobbyists from professional musicians.

Villiger said she sees the open mics as a great way for musicians to begin the process of growing their music and brand.

“It gets you exposure and a feel for what other people are doing,” Villiger said. “It’s not just about the music. You also can be networking a bit with potential customers, potential venues and other musicians.”

Rosen said one of the things that makes southern Indiana such a great scene for music is its proximity to Louisville. He said having the city nearby helps cut down on the instances of too many musicians looking for too few venues.

“The border between the areas is quite porous,” Rosen said. “Artists can move back and forth between two great areas pretty easily. I think that’s a real selling point for the area.”

“A lot of people in the area tend to know one another,” Rosen said. “It’s a pretty tight knit community.”
Powered by