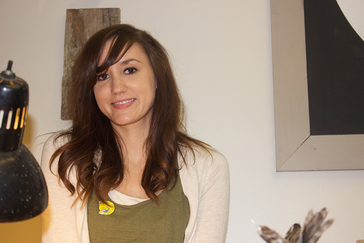 How one woman followed her spiritual guidance and found her true north.

​The shop opened on March 13th 2015, though her journey of being a storeowner started before then.

Ryan has persevered through hardships and followed her passion to get where she is today.

“I was crafting myself and it just fit to go into that line for my store,” Ryan said.

In 2010 Ryan opened her first shop, which was called Creative Boutique. The shop was located on the corner of Market and Pearl in New Albany. She sold items mostly from local artisans but some items were from farther out.

“The community seemed to like it and frequent it,” Ryan said.

She eventually had to move Creative Boutique into the White House Center because her building was having heating and air issues.

“I was there for a little while and then life happened,” She said. “I took a year off to plan for my new shop.”

Ryan’s current store True North, is located on Market Street. She said she started out with some wholesale accounts and then phased everything to handmade and local.

The name of her store was inspired by a conversation with her father who recently passed away. Her father explained to her the biblical aspect of true north.

“He explained that geographically if you follow north you would be off course by 100 miles,” Ryan said. “If you follow your spiritual guide you will be on course and find the true north.”

Ryan said opening this store is her true north.

Ryan runs all the departments of her store and she is mostly self-taught.

“Everything I do here has come natural for me,” she said. “I did not have to go to school for it, though I did take some account courses and received a certificate.”

Ryan does not currently have employees but she does have some friends and a few internships from The Community Montessori School that help her out.

“My friend Erin Gall is just a blessing; she always asks what she can do to help me,” Ryan said.

“I have a strong desire to see True North prosper in New Albany, and that’s why I have gotten involved,” Gall said.

Ryan said she learned a lot from owning her first business, which helped her improve her new store.

“This one is more curated and a common theme flows throughout,” she said.

Her shop is heavily focused on wood but has a variety of other items like pottery, prints, knitwear and soaps.

“My shop is rustic, earthy and minimal with some flare,” Ryan said.

Ryan sells her own handmade items at her store. She makes jewelry out of natural rocks, leather and chains.

“Some of the jewelry is elaborate, but most of it is on the minimalistic side,” she said.

One of Gall’s favorite items at True North is Ryan’s jewelry.

“She has a very unique style that compliments the store and I personally love to wear her necklaces, bracelets and earrings,” Gall said.

Ryan enjoys having the shop because it has given her a way to connect with the community.

“I love meeting members of the community who come in and are overjoyed about adding True North to their places the to shop at,” Ryan said.

“Michelle is very friendly and is very helpful, but not pushy about her products she is selling,” Brodbeck said.

Brodbeck said that the store has a pleasant aroma, which makes the shopping experience relaxing.

Ryan chose to open her shop in New Albany because she has lived there her whole life.

Ryan does not feel like she needs to move to a place like Louisville to be successful.

“I have a lot of faith in New Albany and that I can be successful here,” she said.

Gall said she feels like True North nicely compliments downtown New Albany and is a refreshing addition to Market St.

Ryan said that this time around her business is doing better than Creative Boutique.

“I ran the numbers and I am not even a full year in and it has surpassed what the last store did,” she said.

Ryan has some changes coming to the store such as handmade clothing and renovating to add dressing rooms.
​
“I really want to grow the business so I can give back to the community,” she said.
Powered by