The Candyland of
southern Indiana 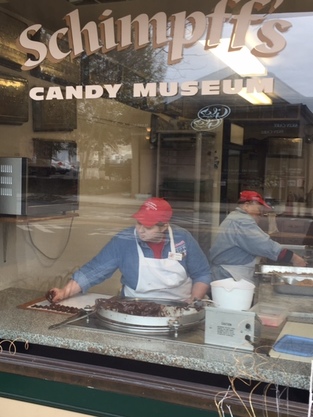 With its original tin ceiling still intact, Schimpff’s old-fashioned jars and cases filled with goodies and the storefront chocolate dipping stations give the customers a taste of the past.

Jeffersonville’s Schimpff’s Confectionery, a family owned candy store and museum to the area, is a staple to downtown Jeffersonville. The Schimpff’s family has been serving up candy and other goodies on Spring Street for over 125 years.

This four-generation family owned business was opened in 1891 by Gustav Schimpff, Sr. and Jr. at its current location. It was in 1989 when Warren and Jill Schimpff bought and took over the business after Warren’s aunt and cousin passed away.

The Schimpff families, who have always lived up above Schimpff’s, decided it was time to keep the family busy up and running. 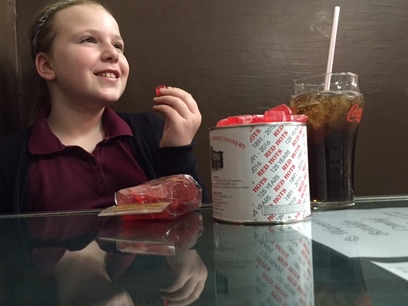 Ava Pesavento, a child of one of the store's customers, samples some of Schimpff's famous red hots.
Jill and Warren Schimpff lived in California and ran the business from afar for 10 years. The two moved across the country, back to Indiana, 15 years ago and currently live above their business.

Jill said what motivated her and Warren is allowing people to restore the memories they have of Schimpff’s and Jeffersonville.

“We want kids to develop memories of what’s it’s like to be in an old fashioned business,” Jill said.

Jo Stearns, assistant cook at Schimpff’s for 10 years, said there is a generational aspect, where grandma and grandpa are bringing their grandkids to develop memories.

“We are re-creating what had been created for them. They were brought here as children and now they are bringing their children,” Stearns said.

Peggy and Ken Brown, long time Schimpff’s customers, are examples of this as they now bring their two grandchildren, Xavier and Roman, to the store.

“We come and get candy for the weekends. The kids enjoy it,” Peggy said.

This favorite local candy store also comes complete with a museum next to the store the public can view. The museum displays thousands of different artifacts of the American candy industry.

“There are very few candy museums in the United States, and this is one of them,” Jill said.

One important piece is an antique vending machine from 1928 located in the museum that still works to this day. 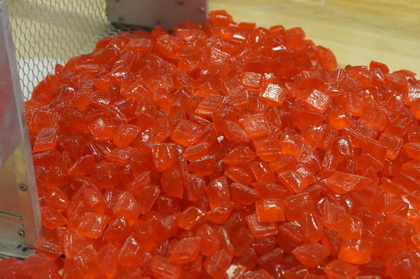 Schimpff's signature Red Hots.
“We can’t afford to give out chocolate bars for a nickel, so we traded it for penny candy,” Jill said. “It’s better than Las Vegas. You get something every single time and you don’t have to be 21 to play our machine.”

The business has been featured on the History Channel’s “Modern Marvels,” The Food Network and is also known for one of Indiana’s “Hidden Treasures.”

Jill said the business has gone through so much over the 125 years it has been operating.

“For it to exist that long and still have value having gone through floods, fires, and deaths in the families, says a lot about a business,” she said.

Jill said keeping people interested in something so old seems like a challenge but it’s been quite easy.

“People are interested in seeing how things are made and being a part of history,” she said.

Stearns added, “I think people come in here so excited because it’s a place you just don’t see everywhere. For some it’s like stepping back in time.”

Speaking on what’s being made at Schimpff’s, Jill said the signature piece is the cinnamon Red Hots which came from Gus Schimpff Sr. hand-written recipe book from the 1880s. 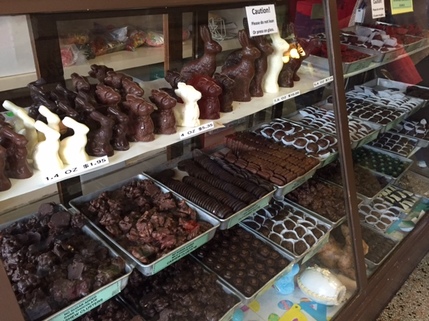 Chocolate Easter bunnies and other holiday candies can be seen at Schimpff's during holiday seasons.
That’s not all Schimpff’s has to offer. From the moment you walk in, all you see is candy in long glass counters, wall shelving with 1930s mayonnaise jars filled with Red Hots, Modjeskas, bourbon balls, salt-water taffy, truffles and everything your taste buds could desire. ​

Jill said some people have asked her why she doesn’t use crystal glasses over the old large mayonnaise jars from the 1930s.

“We said no because people are used to the old mayonnaise jars from the ‘30s and that’s what will stay,” she said.

Also included in Schimpff’s confectionary is a deli where lunch is served.  It’s located off from the candy shop where many come for lunch in the Jeffersonville area since the 30’s. This deli also houses soda fountain from the ‘50s.

Jill said lunchtime is a very busy time for the business and sometimes there is no seating.

“Old timers will just invite another stranger to join them,” she said.

“We have a man that’s been eating here since 1990 and he comes for lunch every week and sometimes twice a week,” said Tracey Bedan, a cashier of Schimpff’s.

Bedan also said they hear a lot of their old time customers talk about coming to Schimpff’s since they were little. She said they talk about going to the Le Rose Theatre and coming in to get red hots

“The bridge has certainly helped but that’s not the only reason they are coming in. We have bus tours come through and will do demos for groups of two to busloads of 52,” she said.

“Easter is the biggest week and Valentine’s is the biggest day,” she said. “The men tend to put off buying the heart until the very last minute, so right before Valentine’s Day people just walked past because you couldn’t even get in the door.”

While a place of business, Schimpff’s attempts to create a family atmosphere for those on both sides of the counter.

“All of our employees seem like family to us,” Jill said. “We don’t have kids so they’re our kids.”

Stearns said she left for two years and ended up coming back to work for Schimpff’s.

“I had to come back,” Stearns said. “Warren and Jill love their business so much that it’s kind of catching and we love it too. It’s a bit contagious.”

Next on the docket for Schimpff’s is growing its business into the building just next door. This will give visitors the chance to have the best of both worlds.

“We want to expand our seating and retail, and this expansion will be a bit more modern,” Jill said.

The expansion will help them accommodate the new business coming across the walking bridge.

Jill said she understood the part Schimpff’s has played in shaping the area around it as she looks forward toward the bridge, the expansion, and whatever else the future might hold for the business and the area.

Schimpff's is located on 347 Spring Street. Their hours can be found on their website.