Art Made from a spatula 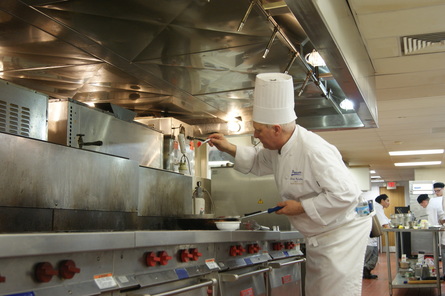 Lonnie Donahue has been the head chef of the Prosser Culinary program for 13 years. He helps the student chefs get the recipe right and explains it to them as a group.
Cooking can be a bit of a challenge for most people. However, 10 kids can make it look like an art form.

Prosser School of Technology is different from your traditional high schools.

How fast can a normal person cook a four-course meal?  For the competing chefs, is all has to be done in less than a hour.

They are led by Lonnie Donahue. Donahue is the head chef of those 10 competing student chefs and head of Prosser’s culinary program. Donahue has been the head chief of the culinary program for 13 years. Last year, Donahue was awarded Educator of the Year by ProStart.

He is joined by his partner in crime, Billy Graham, who is in his second year as assistant chef at Prosser.

Graham and Donahue have known each other for quite some time. In fact, Graham was a student under Donahue while they were at Sullivan University. Graham said that Donahue has helped him get every chef job he has gotten in his life past college.

For Donahue, he has been cooking since he was a young child. Food has been a part of his life for as long as he can remember. He said his first inspiration came from within his family.

“My grandmother was always cooking around me in the summer,” Donahue said. “She taught me how cook and how to appreciate food in general.”

Under these two chefs, Prosser’s culinary program is accountable for 25 seniors and 70 juniors. Donahue said that they are the third largest program in the school. 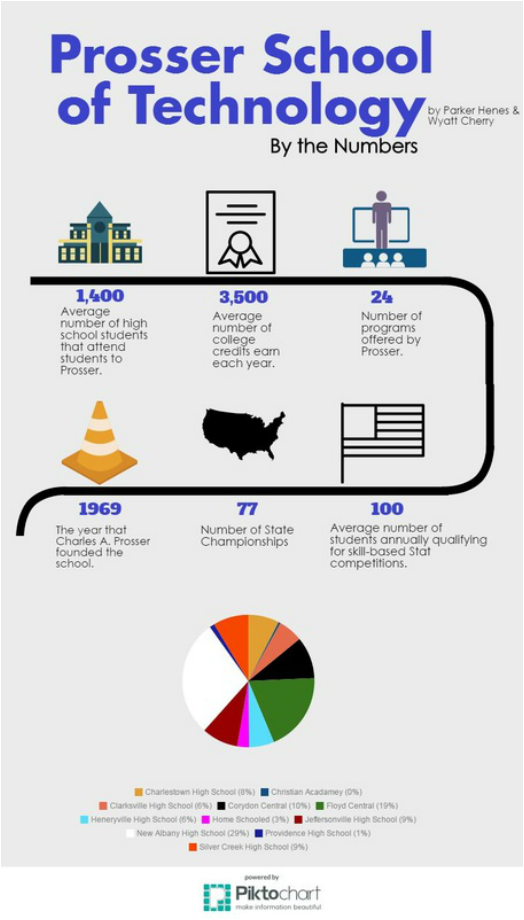 According to Graham, this year’s program has been struggling with being a team. He said this could potentially hold them back from being a great cooking team.

“We have been trying to get the team aspect drilled in their heads for about a month,” Graham said. “If they can comprehend that cooking is a team effort, then they could even better than what they are now.”

But according to Donahue, they are the hardest working program.

“There is a lot of talent in this year’s staff,” Graham said.

Prosser’s culinary arts team will travel to Indianapolis, IN to participate in the 15th Annual Indiana State ProStart Invitational. The event will be held in the conference room of the Indianapolis Marriott East.

Prosser has a chance to challenge other high school’s culinary teams as they only get an hour to produce the meal. This event brings high school competition from the entire state.

“I try to put this team together so we can participate in it every year,” Donahue said.

However, Donahue said that he had to break this year’s team into two teams because of the number of students that signed up. These two teams are only junior and seniors.

Donahue said that this will be his seventh year participating in the event, but he has not won the event.

ProStart has an hour time restraint for cooking. To avoid too much confusion, Donahue said that they start each team 15 minutes apart.

Now there are some cooking requirements. Donahue said that they need to produce eight plates, four of them being of the same thing. According to Donahue, the team needs to produce one entree, one appetizer, one dish using vegetables, one dish incorporating a starch and one dessert.

“We have won something every year, like best appetizer or entree, but never have won the entire event,” Donahue said.

“There are 27 teams in this event,” Donahue said. “You have one hour to complete the challenge, with teams starting every 15 to 20 minutes.”

Not only does ProStart teach student chefs, but it can also be a little bit beneficial to participate in this event. Donahue said that ProStart helps kids gain scholarships. He said that they get one thousand dollars in scholarship money for just being present at the event.

Donahue said that if they win the overall event, the will receive ten thousand dollars in scholarship money.

“We win something every year, like best app or entree, but we can’t seem to win the whole contest,” Donahue said.

“The principal and the school director have donated money to the cause too,” Donahue said.

But there are other ways that the culinary program makes money.

Donahue said that every Wednesday through Friday of every week, the program opens up their own cafe. Faculty and students are allowed to purchase food from the program during their lunch hours.

“This is a way to get the kids to stay together, even if times aren’t looking so good in the kitchen,” Graham said. “And it also gives me a chance to eat some good food.”